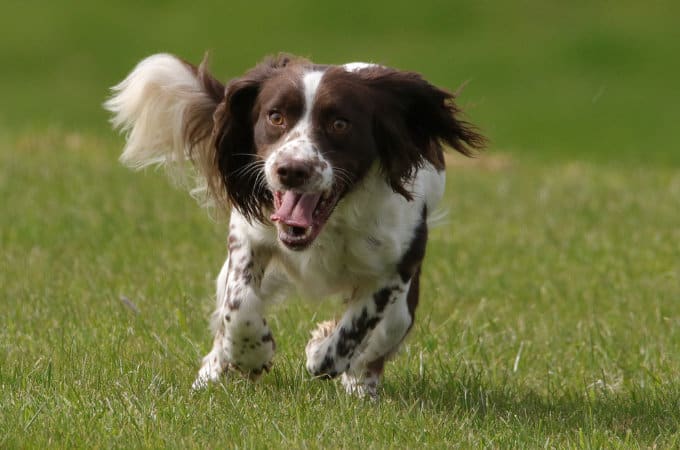 Disclosure: As an Amazon Associate I earn from qualifying purchases. This post contains affiliate links, which means I will receive a commission if you click a link and purchase something that I have recommended.

Springer spaniels are adorable, loving dogs that can bring great joy to a family. What you’ll quickly learn, however, is how much energy these dogs have, and this can be a test on anyone’s patience; especially when they’re puppies.

Before long, you will most likely ask the question, “What age do Springer spaniels calm down?”

The answer: Springer spaniels usually calm down between the ages of 2 to 3 years old, like most dogs. However, due to this breed’s natural high levels of energy, they’re always going to be a handful if not trained properly.

Another thing to keep in mind is that it also depends on your dog’s unique personality compared to others. While some might calm down close to two years of age, others could take longer.

And again, it also depends on what type of training you have done before hand to how your dog will behave in the future.

For a list of decent Springer Spaniel Training guides, you might want to take a look at the following books on Amazon, here.

Yes, even when they’re adults. These dogs have been specifically bred to be out in the field working close with their hunting partners. They have a natural outgoing personality, and they’re very athletic and agile.

If Springer spaniels have no way of expending that energy, there’s a big chance that these dogs will develop behavioral problems. However, Springer spaniels are very intelligent, and so can be trained if you’re willing to put in the work.

Will My Puppy Ever Calm Down?

Puppies can definitely be a handful, but this is a natural part of their developmental process. Regardless of whether you get a Springer spaniel or any other breed, it’s always a good idea to prepare your home for your new puppy so that you can minimize the destruction and frustration that will follow.

It’s normal for puppies to explore and chew on things. It’s also normal for them not to have good bladder control, and the level of energy they have is always going to be higher compared to when they’ll be older.

It’s not only that puppies have a lot of energy; they also don’t know how to manage this energy, which is the reason why they need so much sleep compared to when they get older.

However, by preparing your house correctly, implementing the right training, giving your puppy enough exercises and sufficiently stimulating them mentally, Springer spaniels will be a delight to live with.

How Do You Calm Down A Springer Spaniel Puppy?

A Good start at calming a Springer spaniel puppy down, or any other dog, is by not encouraging excitement and encouraging them when they behave calmly; positive reinforcement.

And of course, you need to find activities to tire your Springer spaniel out.

How To Tire Out A Springer Spaniel

It depends on their age. Puppies that are between nine weeks and four months old should get around 15 minutes of playtime, preferably outside. A good time to do this is in the morning and evening as this is when dogs in general are the most active. It’s also cooler.

A puppy that is between four and six months should go for daily walks not exceeding half a mile. However, don’t forget their 15 to 20 minutes of playtime.

If your puppy is six months to a year old, you can start playing more vigorous games such as fetching the ball for a duration of 40 to 45 minutes. Again, keep these sessions in the mornings and evenings. Don’t forget to give them their daily walks of roughly half a mile.

Once your puppy passes the age of one year, you can begin increasing the distances of the walks and play times, slowly adapting to your dog’s needs as he or she grows older.

It’s not just about tiring your dog out, though. You really need to find ways to stimulate them mentally, and to play a lot with them.

Yes, it’s not always convenient, especially when you have other responsibilities like going to work, buying groceries, doing housework, and every other chore.

But when you do get the time, make sure that it is valuable time with your Springer spaniel. You will realize that even though they are so energetic, it’s also what makes these dogs so fun and loving.

Springer spaniels have been bred to have high energy levels and great stamina. If you don’t provide them with a way to expend this energy, it’s natural for them to become nervous, anxious and destructive.

This is a crepuscular breed, which means that they tend to be mostly active during dawn and dusk.

Because Springer spaniel puppies have so much energy and are not very good at managing the way they expel that energy, they need to get as much as 18 to 20 hours of sleep in order to fully recover.

Do whatever you can to make the area where they sleep as comfortable as possible for them. Just like humans, sleep is important for dogs as well.

If a Springer spaniel doesn’t get enough sleep, they can have a weakened immune system, and it also affects their ability to have good memory consolidation.

If your dog doesn’t get enough sleep, training them becomes more difficult because they’re not able to concentrate as much.

That being said, it’s not always easy to achieve this, especially when your puppy is waking you up in the middle of the night because it can’t hold its bladder.

So, you have to work with what you’ve got and make the most from it.

At What Age Do Springer Spaniels Stop Growing?

Springer spaniels normally stop physically growing at the age of two. But this really depends on your dog’s unique physical traits.

If you put in the right amount of work, you won’t see your Springer spaniel’s high energy levels as a burden. With proper training and providing the best environment for your dog to develop in, you will still have a high energy level dog. The difference is that you won’t feel so frustrated.

This breed is athletic and requires a lot of exercise. Yes, it means that you will most likely be working out a lot as well, so be prepared for it.