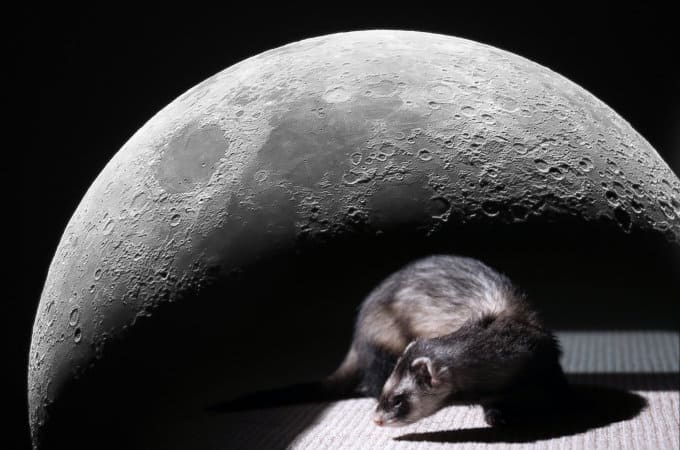 If you’ve been paying attention, you might’ve noticed that your ferret has been a bit more active during certain times of the day, most of that being during the twilight hours. If you haven’t noticed, don’t worry; your ferret has most likely adjusted their schedule to fit yours.

However, if you have noticed your ferret being active during these twilight hours, you’re most likely wondering if ferrets can see in the dark.

The answer: ferrets don’t see well at all in the dark as they are not nocturnal creatures. In fact, they have a hard time adapting to sudden changes of brightness as well. The reason why they prefer to be more active during twilight hours is because these low-light conditions tend to work better for their eyes.

Do Ferrets Have Good or Bad Eyesight?

When you compare them to humans, ferrets have poor eyesight. These creatures have binocular or what is known as stereoscopic vision. In other words, their eyes are positioned a bit more to the sides of their heads then that of humans.

However, this doesn’t apply to all ferrets.

Ferrets also suffer from poor depth perception. This means that they’re not able to distinguish things at distance very well. And when you add this issue with the blind spot they have just under the nose, it is understandable why these creatures will happily run off your dinner table regardless of how high it is off the floor.

Because of this, it is important to ferret proof your rooms so that these little creatures don’t suffer any unfortunate injuries that could land them in the vet or grave.

When a ferret sees your face, he doesn’t really see any details. All he sees is something that resembles a face.

Poor eyesight isn’t a problem for ferrets, as they rely more on their excellent nearsighted abilities which they use in order to communicate with each other. Ferrets have far better nearsighted abilities compared to humans, and when they combine this with their other senses such as sight and smell, they have no problem exploring and getting up to all sorts of mischief.

Ferrets are also slightly colorblind in that they can only see red and blue spectrums. They won’t be able to see the same colorful detail that we see.

What Time of Day Do Ferrets Have the Best Vision?

Ferrets are crepuscular. This means that they live their lives according to when the sun rises and falls. It makes them far more active during the twilight hours, which is dawn and dusk. In fact, it is during these times where ferrets can see better than humans.

How Do Ferrets Make up for Their Poor Eyesight?

Ferrets have a trait known as tapetum lucidum. It basically means that a ferret has a thin tissue that sits just behind the retina. The tissue is able to reflect visible light through the retina which is then passed into the cones and rods of the eyes.

The result is that the brain registers a slightly brighter but blurry image. Normally, this allows animals with this trait to have superior night vision. Unfortunately, this does not apply to ferrets as there are other factors that come in to play which gives them poor eyesight in the dark.

For ferrets, however, this ability is excellent during twilight times as it is able to amplify the lowlight conditions in order to get better vision, but at the cost of sacrificing detail.

It is also the reason why your ferret’s eyes glow during low light conditions.

Sight and smell also makeup for their lack of good eyesight, especially during the dark. Ferrets have hearing receptors strategically placed in the ears to help them have a better understanding of their surroundings. These receptors also help ferrets to easily hear predators from far distances so they can make their escape.

Because of their excellent hearing abilities, avoid placing your ferret in noisy environments as this can make them very nervous. You also don’t want to yell at your ferret, which is the reason why positive reinforcement is always the better route to take when disciplining them.

Ferrets rely so much on their sense of smell that they will refuse to eat prey that has a smell they haven’t learned when they were still kits.

What you have learned is that ferrets can’t see well in the dark. But that is okay, because they are not nocturnal creatures.

However, they have better eyesight in lowlight conditions which is usually during the twilight hours due to their special evolutionary trait that they’ve inherited.

When you combine this with their excellent sense of smell and hearing, these creatures have no problem exploring their surroundings.

While they have poor eyesight during the night, they have excellent nearsighted vision and take full advantage of it.

It’s incredible just how well these creatures have been able to cope with their poor eyesight. If you pay attention to all the successful “great escape” attempts that they’ve made such as continuously finding ways to jump over a barrier in spite of many unsuccessful attempts and finding excellent spots to hide the stash they’ve stolen from you, you can’t help but to have a huge amount respect for them.