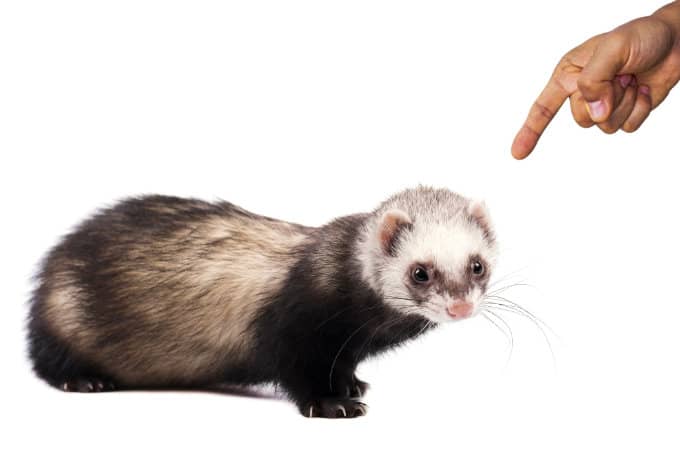 Like all pets, ferrets must be trained to live with humans. Most ferrets begin their journey in pet stores and receive very little training or socialization aside from the relationships they build with the rest of their business (group of ferrets). Here I’ll discuss how to best discipline your ferret to develop new positive behaviors instead of biting.

When is it Appropriate to Discipline a Ferret?

One of the bad habits ferrets develop early is biting. It’s important to note that biting isn’t always a sign of hostility, anger, or aggression in a ferret. Unlike humans, ferrets use their mouths to communicate in ways other than verbal speech. They often nip to send a message of boredom, loneliness, hunger, fear, or alarm. It’s important to train this habit out of a ferret early and help them find new ways to communicate with you.

When Shouldn’t You Discipline a Ferret?

Ferrets are extremely intelligent creatures. Even so, discipline should happen in the moment. You shouldn’t discipline a ferret long after an event as this could confuse them about what they’re being disciplined for. For example, if a ferret chews a piece of furniture while you’re at work, it doesn’t help to discipline when you arrive home. Why? Because your ferret has not chewed any furniture in hours and may assume the discipline is related to something else.

What Popular Methods Are Used to Discipline a Ferret?

This tactic invites you to watch for signs your ferret is going to bite and pre-emptively discourage the behavior with a toy. Using a toy to deter your ferret from nipping teaches him or her to refocus their attention on toys, rather than biting your skin, when they want something or are upset about something.

Pre-emptive play requires you to watch for signs that your ferret is going to nip. I can usually tell when my ferret is getting ready to bite by its breathing. Ferrets give off short, sharp breaths when they’re building up to a bite. Your ferret may show other signs, like hissing, to show you he or she is about to nip.Praise and Treats for Good Behavior – Rather than watching for negative behavior and acting on it, praise and treats for displaying good behavior encourages your ferret to continue displaying these positive habits.

While playing with your ferret, he or she may get worked up. This is common in ferrets but can be the buildup to a nip. If your ferret doesn’t bite, reward him or her with praise, a scratch on the head, or a reward.

Young ferrets don’t understand that biting is bad, and without proper training they will continue to do so. For new owners unaware of the delicacies of ferret development, they decide it’s far easier to give the pet away than try to train it themselves.

Methods I DON’T Agree with to Discipline a Ferret

Physical punishment suggests that you ferret deserves to be hurt for its actions. Most ferrets grow out of their bad behaviors the same way you did as a child growing into an adult. When they are young and new to your home, they don’t understand that biting is bad. Remember, your ferret nips for many reasons, not just to hurt you. In the natural world, ferrets use their mouths to carry their young, play with their siblings, and express how they feel.

I also disagree with rehoming as a discipline. Hoping a ferret will stop biting simply because you give it away is a ridiculous notion. Before buying a ferret, I strongly encourage you to research how they play, what they eat, how long they live, things they need to flourish, and other important factors to ferret ownership.

What Method I Prefer to Discipline a Ferret?

Positive reinforcement training is the best form of discipline in my opinion. While training a ferret not to bite, I find things they love like toys, pieces of raw meat, praise, and use these to proactively dissociate biting from any form of positivity. When they bite they don’t receive these positive things and eventually understand that nipping is not good behavior.

In conclusion, I feel that discipline is necessary for training a ferret not to bite, but it must be used in the right way. To create a meaningful and positive bond with your pet, you should always use positive reinforcement to send a message that biting isn’t a good behavior.

Hopefully, this has helped you decide on your own method of discipline so that your furry companion quickly learns not to nip.