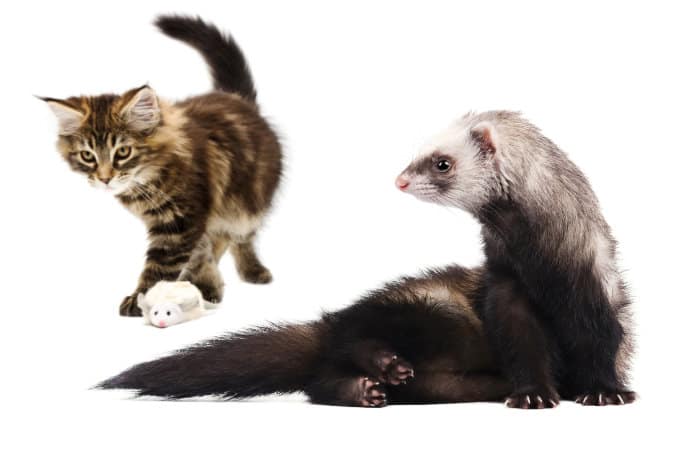 Curious by nature, ferrets are known to investigate their surroundings, especially the people and pets in their home. This leads many pet owners to question how ferrets interact with other domestic animals. One animal which raises many questions regarding ferret relations is the house cat.

Cats are predators by nature, and while they have moments of soft cuddly warmth toward human companions, they are not always as forgiving toward other animals. Like cats, ferrets are carnivorous predators, but this does not mean the two species will forego the opportunity to harm one another.

Throughout this guide, we will more closely examine the potential relationship between cats and ferrets, learn what other ferret owners have tried, and discover the best way to introduce your ferret to a pet cat.

Ferrets are extremely playful and mischievous creatures, who enjoy having fun. Their method of introducing themselves to other domestic pets differs from the standard sniff of a cat or dog. Where many other pets sniff around another animal before deciding whether to accept it, a ferret may become playful. This often includes activities such as running around a cat, hanging on, or nipping at a cat’s tail teasingly.

For a cat, this behavior could be conceived as aggressive or alarming and cause the cat to retreat, hiss, or swipe at the ferret. As a more intrusive and social creature, ferrets are known to sometimes annoy their feline companions. Despite this, some cats and ferrets get along quite well, even during the initial introduction period.

Raising Together vs. Introducing an Established Pet

As with any pet, there is a benefit to raising animals together rather than introducing them later. This is not always an option, but when it is, raising two animals from the infant stage together tends to result in the most harmonious of relationships.

There are many reasons cats and ferrets bond better from childhood, one being, they haven’t yet defined their own parameters of comfort and normalcy. Two young pets growing up in the same house have the advantage of learning to get along from the beginning. This becomes a staple in their lives and would even feel strange should they suddenly be separated.

Pets who are introduced to each other later have already determined a standard for normalcy in their home. For cats, especially, a change such as an addition to the household is rarely seen as positive initially. Cats can take some time to warm up to other animals, and even people.

How to Introduce a Ferret to a Cat

For an initial introduction, I find it best to allow a ferret and cat to see one another but not physically interact. Watching and smelling from a distance provides that first step toward integrating a new pet into your home.

Following one or two of these distanced introductions, you may want to try placing them closer together while still holding the pet gently in case there is an incident. Let them smell each other more closely, but not physically bat at or nip one another.

Finally, you can allow the pets to interact with a bit more freedom, monitoring both until you are sure your cat is exhibiting no stalking behavior and your ferret isn’t trying to ride your cat around the house like a pet pony. (This sounds ridiculous, but ferrets are notorious game players and love the chance to climb on other pets.)

Experiences from Other Ferret/Cat Owners

Below, you will see three different ferret/cat situations which are taken from real experiences of other pet owners.

A No Nonsense Cat and a Timid Ferret: One instance involved a home in which a cat had already established primary residence and was not taking kindly to a ferret “intruder”. In this case, the ferret was scared to come out of her cage because the cat was aggressive whenever they entered the same space.

The cat owner determined that normally her feline took approximately 3-months to get used to a new inhabitant in the house. This is a good point to note for pet owners looking to incorporate a new furry friend into your home. It could take a long time to properly introduce a cat and ferret and allow each animal to feel safe in the house.

Best Buddies with Boundaries: In this instance, the cat and ferret got off on a good foot early. Both animals were fairly young, which could have played a strong part in their ability to intermingle positively.

The two pets became great friends and could even be seen playing with one another and seeking out the other for attention. I would like to point out that while the two pets were friends, they still had a squabble from time to time. This goes to show that even the most well-mannered and friendly ferret/cat relationships require continued supervision while both pets are roaming free.

Friendly Ferret and an Anti-Social Cat: Even with a pet as social as a ferret, your cat may find ways to completely disassociate itself from your newest furry companion. One pet owner posted their own experience of this online. The cat, which was older and set in his ways, paid absolutely no mind to the newly introduced ferret. The two shared the house, but the cat did not really bother with the ferret at all.

Not all animals need to be best friends. It is ok for your pets to distance themselves from one another if nobody is feeling left out or intimidating the other pet. In a situation like this, it is still wise to monitor both pets and know where each is during free time outside of the cage. While a cat might seem disinterested, he or she could be provoked at a later time and vice versa.

Even with this broad range of ferret/cat experiences, your ferret and cat could interact in a completely unique way. Therefore, it is important to monitor the behavior of your pets during the “getting to know you” stage, and even afterwards, as you never know how two predators will behave on their own.

So, do ferrets get along with cats? The answer completely depends on your ferret and cat. No two pets are exactly alike. Even ferrets from the same litter have been known to interact differently than their brothers and sisters. However, with this being said, we do know that as a pet owner you can make ferret and cat interactions easier by gradually introducing them to each other, being patient, and maintaining supervision when the pets are both roaming the house.

I hope this guide has been useful to ferret owners considering cats and vice versa. Ferrets and cats are both beautiful creatures with many amazing attributes. Take your time to truly consider your own pet and how you think he or she would feel with a new addition to your home. Remember to take the time to indulge both of the pets with an equal amount of attention, treats, and love, and give them their own space from time to time.