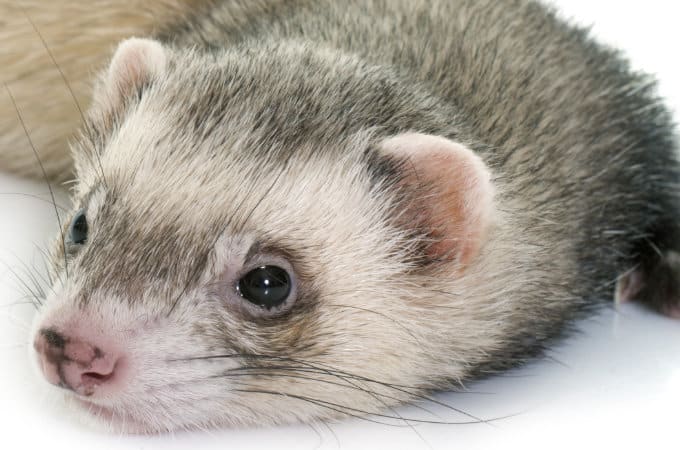 Ferrets tend to mature very quickly. Most experts agree that ferrets normally stop growing at four months and are able to reproduce at this age as well. Keep in mind, though, that we are talking about averages here.

Speak to various ferret owners, which in their own right are experts by mere experience and you will find some very different answers. What’s interesting is that many ferret owners agree that ferret stop growing closer to the six month mark.

I would therefore conclude that ferrets can stop growing anywhere between four and six months.

However, let’s not get caught up too much in numbers, shall we. No matter what size your ferret is, they are most likely going to be energetic, curious and excellent escape artists. And this is what you need to cater for when deciding to own one of these incredible creatures as pets.

It doesn’t matter what size they are, they will always be a handful.

What you can be assured of is that ferrets are small animals when comparing them to larger pet breeds. If you only focus on size when searching for a pet, then a ferret is the right choice.

However, if you’re simply choosing a pet by size alone and not taking into consideration other important factors such as a pet’s energy levels, personality, behaviors and tendencies, then you might need to reconsider your motives for buying a ferret.

This alone could land you and your ferret in some very difficult times, the worst of them being pet abandonment, which sadly is one of the main reasons why many pets, including ferrets, land up in animal shelters.

Hobs normally stop growing anywhere between 4 to 6 months of age. Like most mammal predators, ferrets are also sexually dimorphic.

This can be especially seen when it comes to the size of a male ferret compared to that of a female. In general, male ferrets are larger than their female counterparts.

Male ferrets normally weigh around 2 pounds, and can get as heavy as 4 pounds. From the tail to the tip of the nose, they can reach a length of around 20 inches. Your ferret would be considered tall if it reaches around 24 inches and on the shorter side if it reaches around 18 inches.

Like male ferrets, female ferrets stop growing at around the age of four to six months. At this point, they can reach anywhere between 1 to 3 pounds, and from tail to the tip of the nose, a female ferret can reach a length of roughly 18 inches. However, remember what we said about averages.

Does Their Small Size Cater For Small Cages?

This is a mistake that many new ferret owners make, which is largely because they were only focusing on the animal’s size when considering to buy a pet. There could be many reasons for this.

For example, someone might be looking for a small pet because they don’t have enough space in their house and they need a way to keep things organized and controlled. Buying a small cage is perfect as it would take too much space in the house.

Another reason why small cages look so enticing is because they are normally cheaper than the larger ferret cages.

While ferrets might be small animals, their short legged long bodies require a lot of space to move around. Their high energy levels and intelligence dictates a larger cage to be able to explore, eat, sleep, drink, and play.

As ferrets are also extremely good escape artists, you need to make sure that the cage you by is very sturdy, ferret proof and large enough to feel comfortable in.

If the cage is too small, your ferret will have a greater need to escape, as it will feel completely confined in its area. This could lead to a lot of unnecessary injuries and stress for your ferret as they try to escape because they might get their head or one of their paws stuck somewhere in the process.

However, just because the cage is large, it doesn’t mean that your ferret is not going to try to escape; it just won’t be so desperate in doing so. In the end, you’re still going to need to balance cage time with out-of-cage time.

If you’re just into small animals because of aesthetic reasons only, then a ferret might not be a suitable pet for you. Size can be very deceiving. These animals will constantly keep you on your toes, and while it might be a lot of work, you will be enjoying every aspect of your ferret’s peculiar nature if you have enough patience.