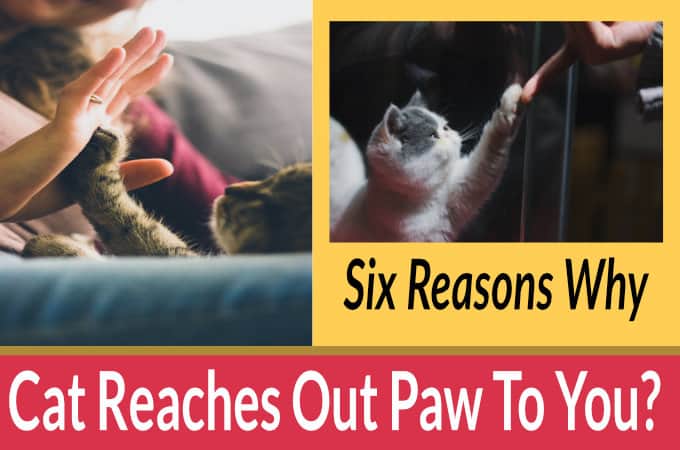 So, your cat reached out its paw to you, and as cute as it might be, you can’t help but to wonder if there’s some deeper meaning beyond an objectively cute gesture. You ponder as to whether he’s merely asking for attention or looking for something. It’s frustrating, but until someone invents man-to-cat communication, we can only take a couple of educated guesses.

Here are some possible reasons why your cat reaches out his paw to you:

As cats have no voice, they need to rely on their movement and gestures alone to convey messages. If your cat keeps on getting your attention, chances are there’s a problem you alone can solve, so be sure to follow your furry friend around as it is likely he will lead you to the source of his misgivings.

In case this isn’t anything in particular your cat want’s done, chances are you are what holds his attention. Maybe you’ve been working too hard lately and your cat thinks it’s time for you to take a break and pet him to relax. For all that has been said here, though, it’s likely your cat just wants to be petted for the sake of it.

Reason 2: A Show Of Affection

These little felines are possessive and territorial, always willing to defend and care for their perceived property. At some point, this translates to them showing appreciation for, and comfort with, your presence in their lives; by lying on their backs and reaching up for your face.

This combination is particularly special given that exposing their tummy means they’re momentary submitting to your dominance, communicating that they trust and feel safe around you.

Keeping in touch with the subject of love and affection, one of the other possible reasons for your cat’s behavior could be its desire to pet you. That’s right, your pet could be trying to convey that its feeling pleased with your recent actions, very much in the same way we do to them; by rubbing us with their paws or heads.

This is commonly referred to as “kneading”, and it mirrors the same exact conduct seen in female cats when they affectionately tend to their kittens. Say you’re rubbing her belly, for example, should you stop and she calls for your attention, it’s a clear green light for you to continue.

What’s more surreal is when they pat us in the head in order to demonstrate trust and happiness. This is sometimes even accompanied with their little rewards, often just being dead animals awarded to us for being good humans, apparently. Although, those gifts could also be a way of your cat telling you that you’re a poor hunter.

Reason 4: Your Cat Is Marking You As His Territory

By their sheer territorial nature, cats tend to stick to both places and objects that smell like them; this behavior does, however, also apply to their owners.

So, grabbing our attentions and rubbing themselves against us, sometimes just jabbing at us with their paws, as well as licking our hands, are all methods of cats trying to claim us via their unique scent so that other cats know we’re already taken. Pretty jealous, aren’t they?

Reason 5: Your Feline Friend is Hungry or Thirsty

This ties back to the first reason as one of the main possibilities for which your cat could be looking for attention, so be sure to first take a close look at his food bowl, water and litter box.

Cats are often capricious and picky individuals that won’t tolerate poor maintenance of their living commodities. Its food must be sufficient and nutritious enough, and their water clean. The litter box must also be cleared regularly so your cat isn’t forced to navigate through his own feces in order to comfortably do his business.

We all need to reaffirm ourselves and remember what’s what every once in a while, right? Well, it really isn’t any more complicated than that for cats as well.

This can be done by reaching out his paw and tapping you, giving you a good sniff or even licking your hands a bit. It’s all with the purpose of either confirming it is indeed you or spreading their scent all over you some more; all with the intention of making clear everyone knows whom you belong to.

It is also a common practice right before bed for your cat to seek you out and confirm that you’re there with him. Cats, like all animals, are naturally vulnerable whilst sleeping and seek out their owners just before taking a nap in order to measure their safety. He trusts you with awakening him should any vile predators wander into the house.

Reason 7: You Have Become Your Cat’s Toy

It should be a commonly known fact by now that cats like having lots of toys to keep themselves busy when they’re not having adventures or checking out their surroundings. Their need for toys is so that if not provided with a sufficient amount, they might start taking your stuff or even yourself as a toy.

One fundamental thing to keep in mind here is that, as far as your cat is concerned, you are its property, and if you don’t behave as expected, there will be a compensatory reaction.

The relationship between you and your cat is a two way street, and just as you seek to communicate with your furry friend, that struggle is often true for the other party as well. Having a pet is a wonderful experience filled with depth and connection; the bond shared between cat and man often lasting a lifetime. It is precisely because of this that both parties need to put in the extra effort to better understand one another.