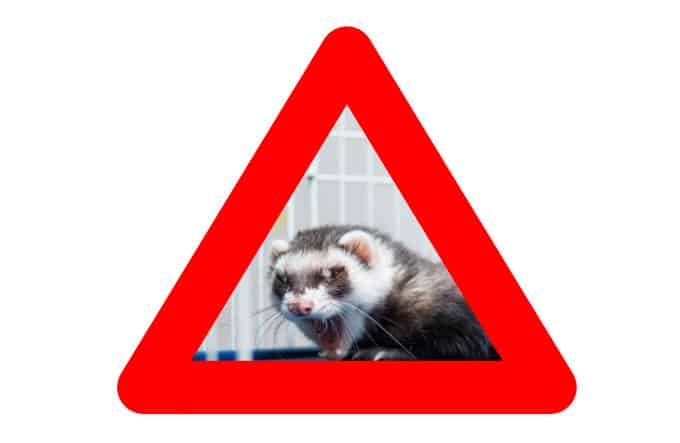 When you first get your ferret home, you will probably be just as excited as him. You’re thrilled with his little antics as he scurries about examining his new habitat. However, inevitably there will come a time when your ferret does something a little strange and quite frankly, unnerving for you and anyone in your household.

While ferrets don’t have a verbal language per se, they do make some sounds that can feel a little intimidating, especially if you don’t have any idea what it means.

In some ways, their noises are their own unique way of communicating with you, so while they are not necessarily noisy animals, you can be sure that if they are making a sound, they are trying to tell you something. These noises are a way of letting you know how they are feeling, you just have to learn ferret lingo to get the meaning of it. For example, if they are making heavy breathing sounds or squeaking a lot, it is a sign that they are happy and ready to play. When they make a clucking sound, it indicates that they are excited, and a ferret normally hisses when they feel threatened or frightened.

Generally, when a ferret hisses, it is important for you to identify it right away. It is usually a sign that they are angry, frightened or otherwise traumatized. Any dangerous animal that feels threatened in this way can be dangerous, even if he is your own pet. Learning what your ferret is trying to communicate and why is crucial to his health and safety, as well as your own.

The hissing noise a ferret make has sometimes been described as a prolonged ‘heh’ sound similar to that of a snake. The sound is produced most often when they are annoyed or angry, but at times, it can also be heard when they are playing with other ferrets. To tell the difference, you need to observe your ferret closely to see if his body language actually matches the sound.

If the body language indicates anger, fear, or frustration, then avoid trying to pick him up or come in contact with him in any way. It is best to wait until he has calmed himself down completely before you make any physical contact with him. Any attempt to soothe your ferret before then could end up with you on the wrong end of a pretty nasty bite.

What Body Language to Look For

When your ferret’s hissing is accompanied by an arched back, a cowering position, and a cautious look over its shoulder, it is clear that he is afraid or upset. This type of body language shows that something has triggered his “fight or flight” mode and he will do one of two things. Your ferret may make a mad dash to the nearest hiding place or someplace where he knows he can feel safe or he may stand and fight. In time, he will take a cautious peek from his hideaway to check if the threat has passed or to see if the frightening thing was actually meant for some other poor soul. If he senses that the danger is gone, he will eventually calm down enough to come out and resume his playing.

If your ferret chooses to stand his ground, his whole body will go into action. You will notice the tail bushes up in an attempt to make himself look larger to a possible predator. If he is really frightened, he might puff up his whole body. While you might see this when a ferret is at play as well, look for how the critter is moving. If he is hissing, bushes up his tail, and is backing up at the same time, you know he is in his fight mode. Either he is angry, frustrated, or frightened, and is most likely ready to attack.

The best thing to do is to leave your ferret be until he has had time to realize that the threat has passed. Then, when he is quiet and calm again, you can go to your ferret, pick him up and offer him comfort. Any attempt to interact with him before that could end up badly for both of you.

How to Calm Down a Hissing Ferret

One of the first things you need to know is why your ferret is acting this way. If you didn’t observe what triggered this sudden change in behavior, it is important to investigate further. Were you playing with him a little too roughly? If he is a new ferret, what do you know about the previous household he lives in? If he was abused by children, he may be more wary when other children are present, or perhaps when you were playing with him, you were a little too rough and you didn’t pick up on the signs that your ferret had had enough.

Ferrets, in general, are highly social animals, so if you find yours is hissing a lot and not in the mood to interact with you, then you know that the problem is usually something he doesn’t like. For the most part, they are willing to do just about anything to get attention, so go back and think about what changed that. Once you put your finger on it, you can back track to what triggered his emotional outburst and caused such a change in demeanor.

To calm your ferret down, it is usually best to ignore him and let him relax on his own. This is normally the best option because he will instinctively calm down when he senses that the danger has already passed or was not real in the first place.

If you find that you have done something to trigger his emotional outburst, you’ll have to start work on rebuilding trust again. When your ferret is calm, start picking him up for short sessions of affection. Maybe holding him for one or two minutes at first and then extending the time for longer periods until he is content to be with you again.

This will require patience and lots of time. If it is a rescue ferret, it will take much longer to achieve your goal. An abused ferret may take a long time to learn to trust you because of his past experiences, but if you continue to push through their fears, in time, it is possible that he will become one of the most loyal friends you could ever have.

Hissing Triggered When Interacting With Other Ferrets

You may also observe that the hissing is triggered because of his interaction with other ferrets. In that case, you will have to take steps to correct the behavior of the other ferret to ensure that neither of them is harmed. It’s sort of like refereeing a bunch of school kids. One of them is bound to get out of line.

At any rate, a hissing ferret is nothing to play around with. When they are in that state, they are extremely temperamental and could be very dangerous. However, once you know how to read the signs associated with hissing and can identify the trigger, it is pretty easy to recognize the problem and find a workable solution.

Having a ferret can be a rewarding experience for anyone. Once you get attached to this highly energetic, bright-eyed, and curious little critter, it is just a matter of time before they steal your heart away. When you notice something wrong, all you want to do is fix the problem so that you can bond again with your little friend. If you follow all of the correct guidelines, there is nothing to stop you from building a long lasting relationship that will last for the duration of your time together.