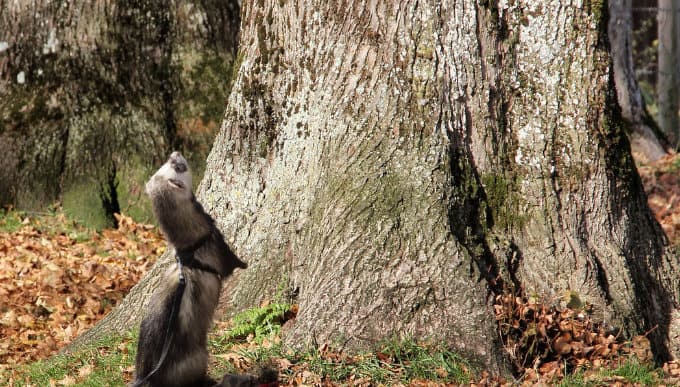 Before you take your new ferret home, it is important to look closely at everything you have with a critical eye. Ferrets are extremely agile animals, and when given the opportunity, they will burrow under, through or climb over anything that is in their way. They are curious animals and can become quite fixated on an object, and when that happens, few things will distract them from getting to it in order to investigate further. Yes, ferrets can climb. In fact, they can probably get to places you can’t even reach in your home.

You should have your home ferret proofed before you let your furry friend out to investigate for the first time. If you have an area that you feel is not safe for them, make sure that you have some sort of barrier in place to keep them out of it.

All of us understand that caging any animal is far from their natural habitat. Even ferrets need a taste of freedom in order to maintain their physical and emotional health. However, when they are set free to roam about your house, you still have to set some boundaries. When observing wild ferrets in their natural habitat, they rarely wander far from their homes, so you shouldn’t worry about setting up some physical boundaries to keep them safe.

Many people think about putting up a child safety gate to keep them from wandering into unsafe areas where they can be harmed. However, while your ferret may show you a childlike personality, they are far from little children, and the gate itself could cause them harm. If your pet is in the mood to explore, a regular child safety gate is not going to stop him from climbing over to find out what’s on the other side. Their little paws can easily get trapped in one of the mechanisms causing a serious injury. In some cases, these seemingly innocent gates could even be fatal.

Rather than use a child safety gate, it would be much better to use a ferret proof gate. In addition to climbing, ferrets are also able to jump pretty high, so make sure your gate is at least 29 inches high. All ferrets have different capabilities and if you’re not sure of what you ferret can do, the 29 inches makes for a pretty good benchmark to start with. If you have an exceptionally smart ferret, you may have to go higher.

Even still, once the gate is in place, observe your ferret to see if he can actually scale it. Remove any other objects from within jumping reach as your pet is likely to use those objects in order to get high enough to jump to the top of the fence and then climb his way to freedom. No doubt, he will not be deterred by any obstacle that you place in his way, so you will definitely have to use the gate as your first line of defense against escape. They are quite determined little creatures and will not give up as easily as you might believe.

Another area you need to be concerned about are the stairs in your house. Ferrets can scurry up those steps before you realize it. But, in some homes, the stairs themselves could pose a serious threat to these little creatures. If you have the type of stairs that have an open back, or you don’t have a solid balustrade for the railings, your ferret could be in danger of falling through and injuring himself. If you’re okay with them climbing up the stairs, make sure that you invest in some plexiglass to put up against the balustrades if there is nothing to prevent them from falling through to avoid that danger. If you don’t want them climbing your stairs at all, then it’s a good idea to put up a ferret proof barrier to block access.

Of course, climbing stairs is not all bad. Some ferret owners teach them to climb in order to give them some more activity when they are out of their cages. If you’re planning on allowing your ferret free access up and down your stairs, it is very important that you take safety precautions to make sure that they will be safe while playing. One tumble down a flight of stairs could seriously injure them and in some cases, could be fatal.

Fences can be a great way to confine your ferret and let him think that he is still roaming free. Fences, like gates, can restrict their movements to a specific area where you are pretty confident that they will be safe, but only if there is no leverage available for the ferret to use for climbing.

A fence, even playpens, can either be a ferret owner’s panacea or it can be a danger. The same guidelines apply when choosing a fence for your ferret as it does for gates. Make sure that the fence is tall enough to keep them from jumping or climbing over it, and also that there aren’t any grooves, notches, or other crevices they can use as leverage to get them up over the top.

Using plexiglass is usually the preferred choice for ferret owners. Its smooth surface doesn’t give the little guy anything he can grab onto with his little paws to hoist himself up. Remember, ferrets are mischievous little guys and will do anything to overcome the obstacles you’ve set up for them.

When outdoors, you have to be extra careful about the fence design you use. Not only does the fence need to keep the ferret contained in a safe environment, it also needs to be strong enough to keep predators from getting to them. While in most households and fenced pens there aren’t a lot of wild predators seeking to do your pet harm, there are stray dogs, wolves, coyotes, and other animals that could pose a threat.

Ferrets love to climb ladders and ramps, so you need to be very watchful. You may think that they are just having fun, but they may just be looking to use the ladder to get to a higher position so they can make a break for it. They could either use them to scurry up and down, which would give them a good amount of exercise each day, but they can also use them to help them reach something you may not even realize.

The problem with ferrets on ladders has nothing to do with their ability to climb. It does, however, have to do with what happens if they jump from them to something else. They have a tendency to be real daredevils when determined enough, so make sure that the ladder is positioned far enough away from any possible object of interest, and have something underneath just in case they miss and end up tumbling to the floor.

Yes, ferrets can climb trees. They use the same basic strategy to get up the side of their cage as they would a tree. However, ferrets are burrowing animals and are more likely to dig. The only reason they may even want to climb a tree is to explore.

It is important to understand that not all ferrets will climb a tree, so you need to know if your ferret is likely to make the attempt. Those that do are not necessarily good at it. You might think that they are similar in agility as a cat, which is an excellent climber and jumper, but the agility of a ferret truly fails in comparison.

The bottom line is that ferrets are extremely determined little animals. While you can play a game with them that involves climbing or jumping, remember that it is a game the two of you should play together. If you’re not playing with them, keep a careful eye on your little critter. Chances are, if he’s climbing to unusual heights, he’s got his eye on something. It just makes sense to play it a little smart so you can be confident that your furry friend has everything it needs to stay safe and healthy.