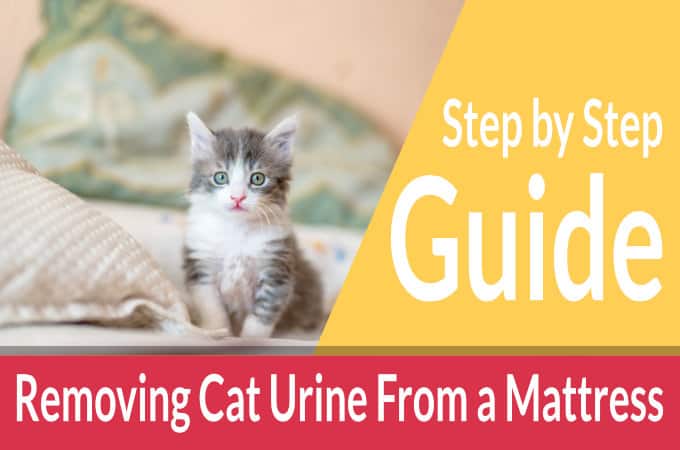 If you’re reading this, chances are that you have had to struggle with the aftermath of your adorable but mischievous cats relieving themselves on the mattress. Don’t freak out just yet, as this can easily be rectified with a little effort on your side. So, get ready, be prepared to get your hands a little dirty, and to be without a mattress for a couple of days or so.

Reasons Why Your Cat Keeps Peeing On The Mattress

Contrary to popular belief, cats do not pee out of their litter boxes in order to deliver a smelly payback for any wrong you might have caused them. Instead, they could just be trying to tell you something. Several diseases and health conditions could be the root cause of this behavior, as the little felines might be associating their designated place of urination with pain.

The very same which could be stemming from urinary tract infections, kidney disease, hyperthyroidism and even arthritis as the effort needed to actually climb into the box can prove much of a hassle for a weakened cat; so before you jump to any conclusions, be sure to promptly take it to the veterinary.

This one might come off as a no-brainer, but be sure to check if your cat has been eating correctly as spraying around is one of the ways in which cats often relieve their stress, with restrictive and plain insufficient diets often prompting them towards this kind of conduct.

This is an often ignored or simply unseen aspect of a cat’s daily life, but just as they can be affected by physical problems, social matters can affect them hugely as well. For example, your cat could be simply taking part in a series of turf wars with the neighborhood’s rivals and is urinating all around as a means of claiming territory.

In the case of male cats, the change in urinary behavior could also be attributed as a means of letting potential mates know he’s around. His hormones prompt him toward this behavior and constitute a fairly natural reaction, but you could consider sterilizing him if it ever gets out of hand.

In case the first three suspects have been ruled out, we are finally left with a culprit, the existence of any abnormal stimuli present in their environment that would force them to change their behavior. Something could be stressing your cat out and making it restless, obliging it to urinate in a different spot, like your mattress.

Could you be bringing too much new people into your home at once? Has a new pet arrived at home and disturbed the cat’s life? There are tons of possible factors to be considered here, so unfortunately, you will have to put on a detective’s hat and investigate if the reason isn’t clear enough.

Tips to Help Prevent Your Cat From Peeing On Your Mattress

As a general rule of thumb, you should own a litter box for every cat in the house plus an extra one, as cats can be quite picky; these should also be in an easily accessible but private spot. It’s also a good idea to place one in every level of your home in case it has several levels; this is especially important for older cats.

In short, keep their litter box as appealing as possible so other factors don’t derail them as much. As a final piece of advice, there are also smells cats can’t stand like bananas, mustard and lavender, so you might want to keep these smells away from the litter box as well.

Should you have learned anything by now, apart from how to clean your mattress I hope, is that putting in the extra effort to understand your cat is essential. These happenings are usually not born out of spite or anything similar, yet, these creatures can regularly end up being mistakenly punished, so be sure to exhaust all four suspects before chastising their behavior. Having said that, should you ever need to clean your mattresses again, we got your back.