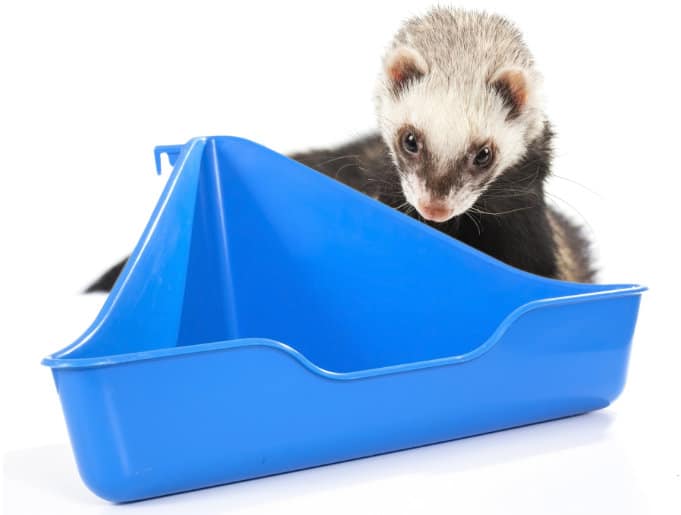 When ferrets chew on things, it is not always because they want to eat. They are highly curious animals and their way of exploring the world is through their nose and mouth. Most ferret owners understand this and do not go into a panic when they find their pet happily munching on paper, cloth, wood, and any number of things.

However, there are times when you notice your ferret eating something that you know will harm his health and you need to intervene as soon as possible for his protection. While it may be a curious move on the part of the ferret, you know that litter contains all sorts of harmful bacteria that will make your pet very ill.

If you see your ferret eating the litter from his litter box, you need to stop that action immediately. Remove the litter and replace it with something he won’t find interesting. The sooner you do this, the better you can keep him from getting sick.

The problem then becomes finding out why your ferret is eating his litter. This is not always easy to determine. There are a number of different reasons why she may gravitate to litter and you’ll have to work backwards like a detective to figure it out. You won’t be able to stop the behavior unless you know what the cause is. Below are a few reasons why some ferrets in the past have started such a dangerous behavior.

There is Something Wrong With Her Food

If you have recently introduced a new food then chances are she is not getting all of the nutrition she needs and is searching for it in other places. Remember, ferrets are highly carnivorous animals so they need a diet that is very high in protein. If she is an older ferret (over 5 years old) and her food is less than 35% protein then she is probably not getting everything she needs. If it is a younger ferret, then the protein amounts should be even higher.

Carefully read the food label to make sure that it has the right balance of protein and fat and has a minimal amount of vegetables and fillers. Absolutely No wheat, No corn, or any other type of grain. Ferrets have a difficult time digesting these foods and will eventually develop a blockage, which could end up with an expensive vet bill to clear it out.

If you’re having trouble finding a quality ferret food, you can read our articles on the best food for ferrets.

Some litters come in little pellets that look very much like their regular ferret food. Take a few pieces of her regular food and a few pieces of the litter and compare the two. If there are any similarities, your ferret may not be able to see the difference. It could be the same size, shape, or even color that is attracting your ferret. Try changing to a litter that is vastly different from what you’re using and observe your ferret closely. If that makes a difference, then you’re all set. If she continues to eat the litter, then stop using litter for a while. Instead, use shredded newspaper or old towels in the litter box until you can really get to the root of the problem.

Your Ferret Isn’t Getting Enough to Eat

Ferrets will eat continuously if you let them, but at the same time, you don’t want to restrict the amount they are eating. If her food bowl is empty and she is eating litter then there is a good chance that she is not getting enough in her regular meals. Younger ferrets require more food than older ones, so if she is young and you’re feeding her twice a day, then try adding a third meal to see if that stops the habit.

There are likely many other reasons why your ferret may choose to eat litter. It is a common concern among owners, pointing out that this usually occurs more often in younger ferrets. It appears to be a phase that many ferrets go through when they adjust to their new environment; as they mature and make the adjustment, they tend to lose interest.

However, it is not a good idea to wait until they grow out of this phase. Their health is at risk, so if you notice your ferret trying to make a meal out of litter you should act immediately. Even clean littler poses serious dangers to the little guys. Most litter is not made from digestible materials, which means that once it gets into their digestive tract it can get stuck, requiring major surgery to remove.

It goes without saying that contaminated litter carries its own risks. Ferrets who consume it will be instantly exposed to all sorts of bacteria, which can quickly lead to diseases and infections that could quickly shorten their young lives.

When you notice your pet eating litter, remove the litter immediately from the cage and replace it with another kind. If the problem persists, then stop using litter altogether. Instead, revert back to the shredded newspaper, old towels or old clothes once again. The newspaper can be tossed when soiled and the old clothing or towels can easily be tossed in the wash before going back in the cage.

Whatever you do, the most important thing is to stop the unwanted behavior. If after all of these things have been done, and your ferret still insists on taking a bite out of his litter, it may be time to see the vet. There could be an underlying medical condition that is triggering the behavior that needs to be addressed. The sooner you take care of it, the better your chances of having a nice, happy, and healthy ferret to play with.

By doing this, you ensure that your ferret has the best chance of surviving this curious behavior and living a pretty good life, content and safe in your protection.