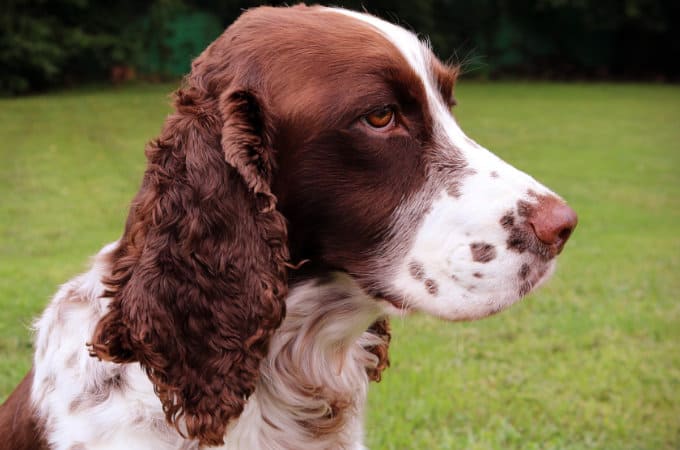 Springer spaniels were bred to hunt by scent, and they do this by using their long ears to mute out far away sounds so that they can focus more on their sense of smell to find their prey. Their ears also help to keep the scent focused around their nose to aid them in being more successful in the hunt.

Why Do Springer Spaniels Have Floppy Ears?

One theory is that Springers normally hunt in areas that have bushy, low vegetation. Therefore, their long, floppy ears help to protect the inner ear from those pointy branches and thorns as well as debris that could get inside and injure them.

Another theory is that their long, floppy ears help to increase a Springer spaniel’s sense of smell by collecting all of the sense particles and pushing them towards their nose.

Yet another theory is that their ears help to block out a big portion of faraway sounds in order to focus on the hunt. Some argue that Springer spaniel’s ears also aid in dampening the sharp sound of the gunshot by acting as natural “ear plugs”.

Regardless of whether it is one or a combination of all of these theories, there seems to be a unanimous agreement amongst hunters that floppy eared dogs tend to do a much better job in sniffing out there pray compared to dogs that have smaller pointy ears.

However, there is another theory that many researchers find to be quite plausible:

Floppy Ears Could Be Due To Domestication Syndrome

According to Darwin, many animals that have been domesticated have droopy ears, and the reason for this could be that, as these animals don’t sense the same type of danger they once did in the wild, the muscles around their ears are less used. This in turn led to their ears becoming droopy.

Around the same time that Darwin published his findings on domestication, another gentlemen by the name of Wilhelm His Sr, who was a Swiss anatomist, came up with an explanation that neural crest cells were responsible for droopy ears occurring in dogs and other domestic animals.

This is known as domestication syndrome.

The way it works is that over many centuries of trying to domesticate animals, the neuro crest cells in these animals decreased in level and quality.

A part of those neural crest cells also attaches around the kidney, and this in turn keeps the adrenaline meter high on wild animals, making them easily aggressive in some breeds, while in others, they will simply take flight at any sense of danger.

As some of these animals became domesticated, especially dogs, less of those neural crest cells formed around the kidneys, and other neural crest cells began to change the appearance of the animals, such as giving them smaller snouts or droopy ears.

Typical Problems Springer Spaniels Have With Their Long, Floppy Ears

While your Springer’s long, floppy ears are great at protecting against the harsh outdoor environments when they are running and playing outdoors, they can also suffer from infections and other health conditions related to the ear.

The reason for this is because their floppy ears are not allowing any type of air circulation to occur around the ear, so this can lead to humidity from being trapped inside, which in turn makes it the perfect habitat for bacteria.

This problem is even more evident with Springer spaniels that swim a lot.

One way to know if your Springer has an infection is by smelling their ears. If they have a bad odor, and/or it is read instead of pink inside, then there is most likely an infection.

If you also notice that matting is occurring around the ears, this is probably due to your Springer obsessively scratching in that region. If this is the case, it means that there is something wrong.

Before doing anything to remedy the situation, first take your Springer to the vet. In fact, never spray anything in your Springer spaniel’s ears unless your vet has specifically told you to do so.

Another problem that Springer’s ears are prone to is matting on the fur of their ear flaps.

Over time, the fur will pick up a lot of debris, especially if they have wet ears from swimming.

Of course, with proper maintenance, a lot of these potential problems can be avoided.

Tips To Maintain Your Springer’s Ears

If you keep the hair around your Springer spaniel’s ears trimmed on a regular basis as well as brushing them, you will be able to prevent any type of matting occurring.

By regularly, I mean roughly once a month. Of course, this really depends on how dirty your Springer gets when playing outside as well as how often your pooch likes to swim.

By simply using your own judgment, you can decide if you should be doing it once a month or once a week.

If you decide not to take your Springer to a groomer, make sure you use a good quality pair of trimmers to do the job.

Trim away all of the wavy hair on your Springer’s floppy ears. A good rule of thumb is to keep the hairs no longer than 1 inch long.

Once you’re done trimming, flip your Springer’s ear so that you can trim the hairs growing on the inside near the base of the outer ear.

Be very careful not to accidentally poke your Springer. However, if you’re using an appropriate pair of grooming scissors, which are usually small in size, then you will find there is less chance of this happening.

If your vet has given you the green light, you can also rinse your Springer spaniel’s ears with the type of cleaning solution that is designed to dry up the moisture inside your pooch’s ears.

The way in which the cleanser works is by squeezing a few drops of it into your Springer spaniels ear canal and then holding the ear flap down and distributing the solution by massaging your Springer’s ear for 10 to 15 seconds.

Once this is done, you can then let your Springer spaniel shake it out or you could use a clean ball of cotton to dab around the ear inside, never trying to push it deep into the canal.

You’re simply using the cotton ball to swab the ear. Also, every time you do another spray, make sure to use new one.

While we might never be sure exactly why Springer spaniels have long, droopy ears, there is one thing we can be sure of: the amount of cuteness that their ears emit makes it even more difficult to stay upset with them when they get up to some mischief.

They look so adorable when their ears flap up and down while they’re running, and this alone makes it all worthwhile, even during those times when we have to deal with ear maintenance on a regular basis.