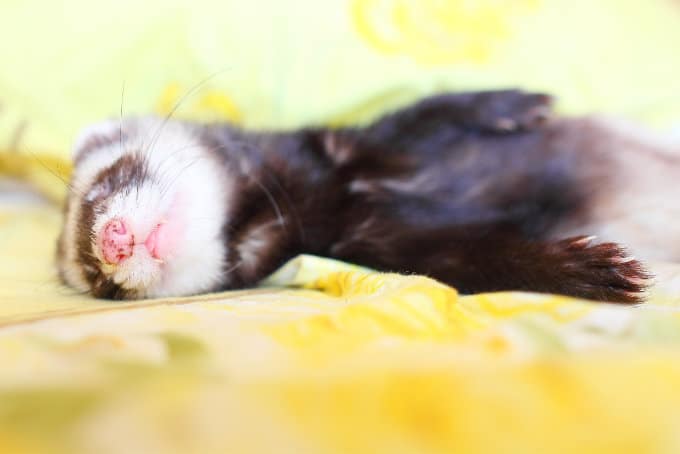 One of the most disconcerting things for new ferret owners to get used to is the amount of time a ferret sleeps. Unlike other household pets, ferrets can go into a slumber that consumes much of the day and the night, up to 18 hours. This is especially true when they are adjusting to a new environment. In these cases, ferrets may only be awake for two or three hours a day; just enough time to eat and play a little bit before falling back to sleep again.

New owners see this as alarming and often go into a panic, thinking that something is wrong with their ferret. But in most cases, there is little need to worry. It is not uncommon for a ferret to sleep as much as eighteen hours a day. While it is true that excessive sleeping should be a reason for concern, before you get yourself all in a tizzy, it helps to know what excessive sleeping is for a ferret.

Ferrets are Not Nocturnal

Some believe that ferrets are nocturnal creatures and are usually awake at night while their human counterparts are asleep. It is a logical assumption when you see them slumbering the daylight hours away. Ferrets are not nocturnal, but are highly adaptive animals. After they learn your routine, they will adjust their sleep patterns to get the most out of the time that you have to spend with them.

Another reason why a ferret may be sleeping the day away is because they may be going into a hibernation phase. Since ferrets come from the Northern Hemisphere where the winters can be extremely cold, they go into a so-called hibernation period each day. During these colder days, even when they are awake, they will have periods where they will be less active. This low-activity phase can vary depending on a ferret’s age or gender, but even during those waking moments they will not be firing on all cylinders.

Typically, you can expect around four hours of activity a day and the rest of the time will be dedicated to sleep. Still, if your ferret is sleeping more than eighteen hours a day, chances are there are other things that might be causing them to sleep more.

Temperature Could Be One Reason for Your Ferret Sleeping Too Much

In most cases, the temperature of your home could also be playing a factor. If your home is kept at a relatively cold temperature, it will trigger their peri-hibernation phase and they will sleep even longer than usual. However, Temperatures that are too warm can also slow down their level of activity and encourage them to sleep more.

There is some dispute as to whether the additional sleep during winter is because of weight gain or because the temperature of your home has changed. Generally, when the winter months come, we humans turn up the heat, which encourages a slowdown of a ferret’s activity level. In preparation of the winter months, ferrets will begin to grow extra fur. So, when the heat is on in your home to keep you comfortable, your ferret is probably feeling it even more. I think this is something we should keep in mind when setting up the bedding and beds for our ferrets.

In most cases, ferrets handle the cold weather better than the hot. When they get too warm, they will usually slip into a deeper sleep rather than go active, which is what they will do in cooler climates.

The optimum temperature for a ferret is the point when they do not have to put any energy into maintaining a stable body temperature. When a ferret is asleep, their body is not producing their own heat, so they need the right environment to keep their temperature at the right level. The optimal temperature is normally between 50 and 80 degrees Fahrenheit.

Your Ferret Could Be Ill

The eighteen hour a day sleep pattern is common for many ferrets, but there may be times when they will sleep longer than that. If you feel that your ferret is getting just a little bit too much shut eye, it may be the result of a medical condition known is Insulinoma. A development of a small tumor in the pancreas. This is a common occurrence in humans and in animals when the blood sugar levels drops too low.

If your ferret has this condition, you will notice other signs as well. They may be reluctant to play with you or with other ferrets, you might notice excessive licking, or you might see a noticeable ulcer growing on their hind quarters. Insulinoma is a dangerous condition, and if you suspect that this might be the problem, then you should get your ferret to a vet as soon as possible.

Other health conditions that may cause your ferret to sleep too much are adrenal disease, which usually occurs in older ferrets. With this condition, your ferret will have hair loss, and may be lethargic when awake. To treat adrenal disease, your vet will need to prescribe your ferret a course of antibiotics as soon as possible. The condition will not improve on its own.

Ferrets do have something referred to as a “dead sleep” which can create a great deal of panic in someone who doesn’t understand this type of phenomenon. Sometimes, a ferret will go into such a deep sleep that they appear to be dead. No matter what you do, nothing seems to be able to rouse them. You can pinch them, shake them, or even hit them and they do not respond. They simply lie there, limp as rags.

The first time you see this can be really scary, but it is a common sleeping pattern for ferrets, so as an owner, don’t be surprised when it happens in your home. Some ferrets seem to go into a dead sleep more often than others, but they all do it from time to time. When it happens with your ferret, just check to make sure he is still warm, his mouth still has its pinkish color, and that he is breathing normally. If all of these signs are present, know that your ferret is not dead but is merely in a “dead sleep”. You might even see a little bit of drool, and they may stiffen up, appearing like rigor mortis has set in, but it is rarely something to worry about.

The best thing to do is to first check for other warning signs, and if there are none, just leave your ferret alone and allow him to rouse himself in his own time. Generally, they will wake up thoroughly refreshed and ready to eat and play, and they may even give you an odd look, wondering what you were all up in arms about.

Whether your ferret’s extensive sleeping habits are a result of common behavior or from an illness, it can be better determined once you are familiar with their regular routine. If you suspect it might be the signs of an illness, ask the same questions that you might ask if it were one of your children. Is he eating well? Is he just exhausted? Does your ferret still interact and play with you? If you’ve checked for other signs of illness and can’t find any, then your little critter is probably okay.

That said, it is important for you to keep a watchful eye on your ferret for any indication that may show that something is going wrong. The earlier you catch it, the better your chances of getting him the medical help he needs at the right time.

Ferrets are a valuable asset to your household. They are fierce companions that will break your heart when they leave you, so the longer you can keep them in good health, the more joy and pleasure you’ll bring to the lives of your entire family.