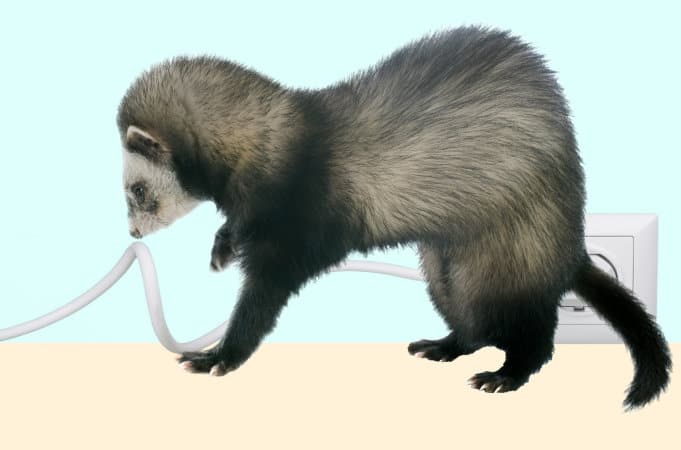 Ferrets are extremely curious creatures, testing boundaries, pushing into spaces they shouldn’t always explore, and chewing on just about anything they can get their little chompers on. Unfortunately, one of the household objects ferrets enjoy chewing is electrical wires. This is not uncommon for small animals, such as mice, gerbils, hamsters, rabbits, and even larger pets like cats and dogs.

So, what can you do to protect your ferret from the dangers of wiring around the household? Here are some suggestions and other important information on the subject:

Your ferret is a cute but wily creature and can fenagle its way into a variety of nooks and crannies you’d probably rather it didn’t. Therefore, it’s important that you distribute wiring in your home strategically.

The best way to protect your ferret from chewing electrical equipment is by keeping it out of reach. It sounds like a daunting task but doesn’t have to be. Here are a few ways to keep wires out of your pet’s reach:

Contact Strips: Picture hanging strips, such as Contact Strips, are great for hanging anything you want to stick up without damaging your property. When trying to remove tempting wires from your ferret’s point of vision, taping them to the undersides of tables, or anywhere else they might run is helpful.

However, some surfaces can be damaged with tape, which is why Contact Strips work so well. These powerful strips can hold heavy objects and are easily removed without peeling paint or damaging wood.

Zip Ties: Zip ties help keep wires snug against table legs or lamp posts, so they aren’t running willy nilly along the floor where you ferret might nibble it curiously. These cables are available at most home hardware stores and don’t damage your wiring or electrical equipment. They also work well for binding long wires together.

For example, if you have a lot of excess wiring coming out from behind your television, you can wrap it together and use a zip tie to keep it from coming unraveled. The less free-range wires your ferret can see, the less likely he or she is to chew them.

Wall Hooks: Wall hooks aren’t the least damaging method to hand wire, but they work well in a pinch. Wall hooks are especially great for lifting wires over door frames or positioning them along the ceiling instead of along the floor. Most homeowners run cable and internet wires along the baseboards in their home, a perfect spot for furry ferrets to chew.

By running them along the ceiling, over doorways and above windows, you keep them far away from your pet. Hooks often require screwing in, leaving large holes when they’re finally removed.

Outlet Covers: Although ferrets aren’t known for sticking their noses into open sockets, blocking outlets with covers will keep them from sniffing around sockets and wires plugged into the wall.

Should your ferret lick or nibble at the edge of a power outlet, he or she could electrocute themselves. Outlet covers can be purchased from home hardware, baby stores, and some multi-purpose stores, such as Walmart.

Store Food Away from Wires: All it takes is one taste for your ferret to come back time and again to chew the same wire in your home. You can make electrical wires less appealing by keeping your pet’s food and water dishes well away.

It also helps to keep your ferret’s cage and bedding far from electrical sockets and wires, as he or she might be able to reach them through the cage bars.

Limit the Area Your Ferret Can Play In: One way you can do this is by setting up a space that is completely closed off from other areas where there is wiring. This can be achieved with a playpen for ferrets or by dedicating a room in your home that is completely ferret proof for your furry friend.

One of the ways you can train your ferret not to bite harmful electrical cords is through negative sensory experiences. Like the operative conditioning experiment of B. F. Skinner, negative reinforcement will teach your ferret what not to do, or rather, what not to chew.

You should never physically hurt your pet to get this message across, but subtle deterrents like bad odors or tastes will prevent nibbling where you don’t want nibbling to occur. If every time your ferret bites down on a wire he or she tastes something awful or smells something offensive, the message will eventually sink in that this behavior causes a negative result.

Avoid Scented Plugins: Scented plugins are a bad idea if they’re scents your pet is attracted to. On the other hand, some ferret owners have had good luck using citrus scented plugins to deter ferrets from outlets. Many scented plugins come in delicious scents such as baked goods, fruit, and even cocktails.

Food scents run the risk of drawing the attention of curious hungry ferrets, even if they are carnivores.

Cord Covers: For wires that can’t be pinned up out of the way, you can invest in some heavy-duty cord covers to keep your pet’s teeth from sinking in all the way. Some of these covers are infused with bad smelling or bad tasting ingredients, unnoticeable to humans, but unappealing to your pets.

Brands like Crittercord and Chewsafe completely surround the cord with a thick layer of non-toxic medical quality tubing. The tubing encapsulates the wires, and encases the plug, making it impossible for your ferret to sneak a bite.

Cord Sprays: If you’re unable to find any cord covers at the local pet store or hardware shop, you can invest in cord sprays instead. Animal sprays such as Marshall Time Out Training Spray can be used to create a negative experience each time your ferret tries to lick or nibble a wire. The spray tastes terrible, which trains your pet to stay away from wires and choose better tasting chew toys.

There are a variety of brands with different scents and tastes; some are specifically for ferrets, while others cater to small animals in general. Be sure to read the ingredients in anything your ferret might ingest before use to make sure it’s safe for consumption.

Risks to Ferrets Who Chew

Here are a few risks you avoid by being thorough and careful in cord placement:

Burns: When electrocuted by a wire your ferret can be badly burned. One such unlucky pet had a hole burned clear through the roof of his mouth after nipping a live wire. The ferret required more than one surgery, and while it did recover, it was a highly traumatic experience.

The creature used a feeding tube to eat, and wasn’t allowed to be overly active, or to ingest anything naturally until everything fully healed.

Choking Hazards and Bowel Obstructions: It’s not just the electricity you need to be concerned with for ferrets chewing on wires, it’s the risk of choking. Ferrets have small throats, which can become lodged with indigestible materials quite easily.

Another risk your ferret faces when chewing is the possibility of a bowel obstruction. Biting off hunks of plastic and rubber can hurt your ferret’s digestive system, as its tiny body is ill-equipped to handle such a material internally, and it may require surgery to be removed.

Poisoning: The electrical wiring which runs through your home may be covered in a protective layer, but deep inside that plastic exterior lies copper and zinc wires. Zinc poisoning causes many gastrointestinal issues, as does copper, and in extreme cases of both, it may result in death. A ferret which has chewed through wiring should be seen by a medical professional immediately, even if the ferret doesn’t appear to have been electrocuted.

Electrocution and Trauma: Too much electricity can kill a large human, let alone a tiny ferret nipping on a wire. Ferrets which live through electrocution caused by biting live wires often have brain or heart trauma following the experience. Your pet could require hospitalization, medication, and even surgery, and may never be the same again following treatment.

Ferrets are inquisitive, cuddly, and explorative, you can’t always keep them in your line of vision, which is why it’s crucial to ferret-proof your home, especially electrical wires. Electric wiring running from internet routers, television sets, computers, and lamps run the risk of causing irreversible heart and brain trauma, burns and injuries, and even death.

Protect your ferret by keeping loose cords bundled tight with zip ties, sticking cords up under tables, along walls, and on the ceiling rather than the floor. You can do this with picture hanging strips, such as Contact strips, wall hooks, or even tape. You can also use cord covers, deterrent sprays, and scented plugins which repel ferrets and small animals from wall sockets.