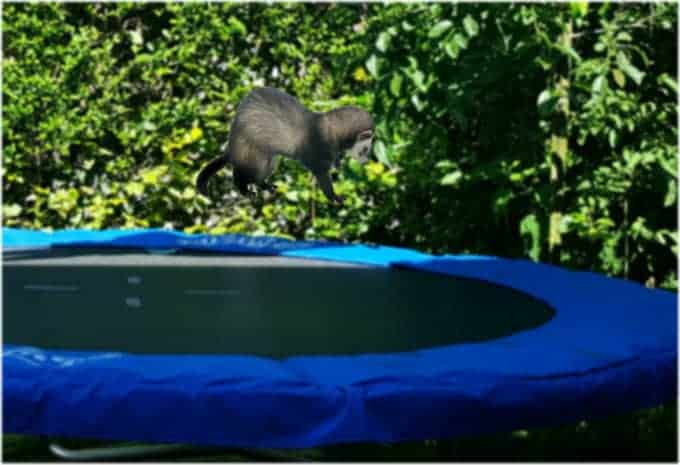 Because ferrets are seen as household pets, we often assume they have the same capabilities as cats and dogs. We usually allow them to roam free about our homes, and we are entertained with their impressive digging, climbing, and jumping abilities. So, yes, ferrets can jump, and some can jump pretty high too, but most ferrets are only able to jump a few inches off the ground. Your real concern, however, should be where they are jumping and whether it is safe for them to do so.

Ferrets definitely have the ability to jump on and over lots of things, but because of their poor depth perception, they can have just as many failed attempts as they do successes. When they miss their target, it can be a cause for great concern. Landing on their feet is not likely to cause any lasting harm and is usually the favored outcome for them, but while they may be as fearless as cats when it comes to this endeavor, they do not have the agility to take a missed landing and readjust their body to make sure that happens. As a result, ferrets could land on their neck, back, or another part of their body, causing injuries sometimes so severe it could cost them their life.

What You Should Know About Ferrets Jumping

Ferrets are often quite fearless and will not hesitate to jump on or over any obstacle in their way. They are fiercely determined and will continue to do this until they either reach the object of their attention or it is removed from their sight. While other animals are quite willing to recognize failure and turn their attention to other things, ferrets will not.

To reach their goal, ferrets will usually use a combination of jumping and climbing. Since they are much better climbers, they will normally attempt to climb before they jump. They are very intelligent animals and will quickly maneuver any object they can to lessen the distance they have to jump.

One of their reasons for so many failed jumps is because of their limited eyesight. By nature, ferrets are nearsighted and can only see a few feet in front of them. This makes it difficult for them to gauge the distance they are attempting to make, most often meeting their attempts with failure. Ferrets are not nearly as coordinated as a cat, so they are more likely to meet injury when they attempt to jump further than necessary.

Still, ferrets are pretty resilient creatures and there isn’t much reason to worry about their jumping as long as the environment is safe and there is a safe landing zone to accommodate for those frequent misses. To protect their ferrets, some owners place a web like netting underneath any area where their little critters are known to try to jump to catch them if they fall while others will try to remove any potential launching pad that they feel may be dangerously high.

Ferrets have been known to jump off from all sorts of things. They may jump only a few inches from one level to another in their cages, or they may attempt to jump on or over a playpen or a barrier that has been set up to block them from another area; they may even climb up on you and take a flying leap from your shoulder or your lap.

There could be many reasons for this. For example, ferrets love chasing games because it imitates hunting behavior. They like the idea of the hunt, so if they are playing and chasing, they will jump without hesitation in an attempt to catch their prey.

Find Out Why Your Ferret is Jumping

If you’re concerned about your ferret jumping in a particularly dangerous area, you need to make sure that you know why. Chances are, he is trying to get to something or get out of somewhere. In either case, it is important for you to understand what your ferret’s motives are so that you can make the necessary adjustments to keep him safe.

Jumping for Play: Ferrets usually jump when they are happy and want to play. They get excited and will start doing something called the ‘Dance of Joy’ where they hop around you in funny little dance like movements. Sometimes they get so excited that they don’t pay attention to where they are jumping and can easily throw themselves off of things or into things in an attempt to get you to play with them.

Jumping for an Object of Interest: Ferrets can be very determined. They can become quite obsessed when they set their sights on something, and if it is not placed out of reach, they will not hesitate to jump to get it. In ferret-proofing your home, think about those things that might pique their curiosity and make sure these items are well out of reach, or better yet, out of sight. The less temptation ferrets have, the safer they will be.

Jumping to Escape: Out of all the reasons for a ferret to jump, this is the one you should be most concerned about. Not only will they take unnecessary risks to make their great escape, if they can see a way out, they will not stop trying until they have succeeded. You may not be able to prevent your ferret from making such jumps permanently, so you will have to be very vigilant in staying ahead of your ferret-proofing attempts. You can be pretty sure that even if your ferret fails a hundred times, if he gets it into his head that he can accomplish it, he will continue to make attempts until he succeeds (or dies trying).

How to Stop a Ferret From Jumping

Bottom line, you can’t. If you are concerned about your ferret jumping, you’ll need to get yourself a new set of nerves. The only possible way you can attempt to discourage them is to remove the temptation, but you can pretty much guarantee that another temptation will soon come along to replace that one.

Managing the life of your ferret is an ongoing task. Each ferret has their own personality and you need to know and understand them just like they will grow to understand you. The only thing that you can count on with your ferrets is that they are all curious, love to play, and are fearless. A difficult combination for you or any other ferret owner who doesn’t have the stomach for the falls that will inevitably come from their many failed attempts at jumping.

Overall, ferrets are pretty tough critters and do not accept failure very well. Keep in mind that they have just as many successes as they have failures in their attempts. Most occasions, they will land, be stunned a little bit, and then get up and go about scurrying about again. However, it is that one time that will send you into a panic and an expensive trip to the vet for an unexpected injury. So, whether your ferret is jumping off of the top of his cage, trying to leap over tall fences in a single bound, or scurrying after an object he is chasing, it is not the jumping you need to worry about, it’s the landing.

You’re lucky if you get a ferret that can only jump a few inches off the ground; there are those who will attempt to jump four or five feet that are really at risk. Whatever the case, once you know your ferret’s abilities and accommodate for them, their many falls may only need to be chalked up to entertainment for you and your family.